Continuing with our multiple trunk theme (yesterday was Clump style, today is forests) and with Walter Pall (day before yesterday), we’ll go back in time once again to a post that originally appeared in 2014. (we’ve added a photo and a little more text). I think it’s one of our best on forests, and worth another look.

Focal point. Everything organizes around the dominant tree. Your eye goes there first and from that point the rest of the planting falls into place.
Continued below…

Balance. If you look at the silhouette of the whole planting you’ll immediately see and feel how everything flows from the dominant tree, creating an overall sense of balance and harmony. This has a lot to do with the natural strength and dynamism of scalene triangles and something called The Golden Mean or Golden Ratio (aka Magic Thirds).

Scale. Notice how the large tree is toward the front. Not only does this show off its size and power, it also highlights a sense of depth when contrasted with the medium sized trees in the center axis (left to right) and the smaller trees in the back. Rather than seeing these trees as smaller as they go back, you might see them as further away.
Continued below…

Continued from above…
Age. When it comes to age, there are two types of natural forests: ones where all the trees are more or less the same age and size (for example a stand of trees that grew up after a forest fire) and the more interesting and common old forests with trees that show a mix of ages and sizes.

This planting is a good example of the latter, with the main tree emphasizing and even exaggerating the contrast. To carry this a little farther, you might even imagine that at one time the dominant tree stood alone and gradually seeded the others.
Continued below…

Continued from above…
Walter Pall often shows several photos of the the same bonsai with different backdrops and at different times. I think this is a good practice, especially given that no single photo will ever completely capture the power and dynamism of a good bonsai. Not to say that several photos will do that either, but they might help. 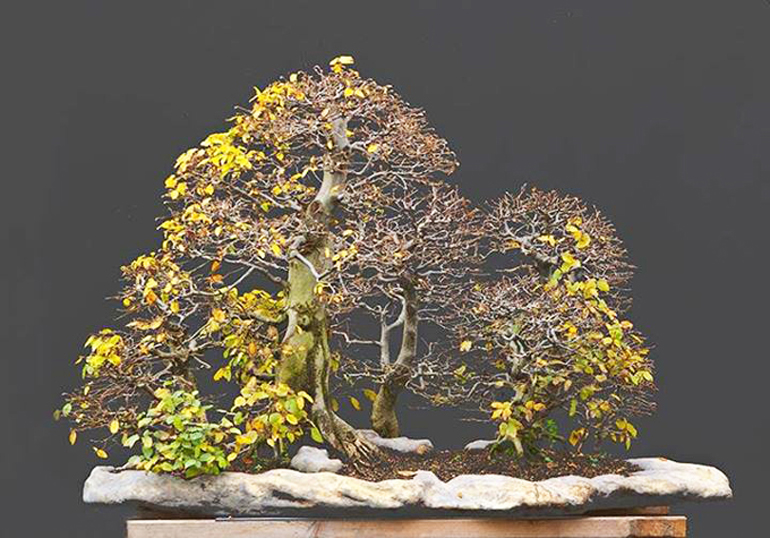